When will it arrive

HERO Plus LCD delivers 1080p60 video and 8MP photos. It also features the convenience of a touch display. Built-in Wi-Fi and Bluetooth connect to the GoPro App to allow for shot preview, total camera control and easy content sharing to Instagram, Facebook, Twitter and more from your phone or tablet. Rugged and waterproof to 131’ (40m), with the ability to power up and record at the press of a button, HERO Plus LCD is the convenient life capture solution for all of your adventures.

Please Note: We can not accept returns for this item for any reason unless the package is unopened. 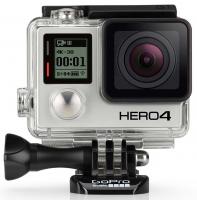 Will the video filmed on the Hero Plus LCD look good in slow motion? Or will the video be choppy?
Thanks for your question. The Hero 4 Silver has the ability to shoot in many different frame rates and many different resolutions. The lower frames per second one films in (30fps) will have a less smooth slowed down video appearance. This means that if you slow the video down to half speed it will be a little choppy. 30 frames per second with 4K resolution is meant for extremely high quality full speed video and very high quality photos. However, if you shoot in a higher frame per second setting (60fps or 120fps) the slowed down quality will be much smoother.

What is quick capture and hilight tag?
QuikCapture turns your GoPro into a one-button camera so you’re always ready to capture key moments. HiLight Tag lets you mark those moments during recording and playback so you can quickly find them later for editing or sharing using the GoPro App or GoPro Studio.

Can I snap a single frame photo from a video I recorded?
Yes, you can go through your footage one frame at a time and find the perfect still shot to turn into a high quality photo.